Three former Oklahoma basketball stars are starters in the NBA and a fourth is in his 12th season as an NBA head coach.

With the 2019-20 NBA regular season nearing the halfway point, we wanted to check in to see how the three big-name former Sooner stars are performing this season.

Blake Griffin, winner of both the Naismith Award and the Wooden Award in 2008-09 as the best player in college basketball, is in his 12th NBA season and third with the Detroit Pistons. A local product who didn’t get away (he grew up and played high school basketball in nearby Oklahoma City) Griffin was one of the highest-rated basketball recruits in OU history.

The No. 1 overall pick in the 2009 NBA Draft, Griffen spent his first nine NBA seasons as a Los Angeles Clipper.

He missed the entire 2009-10 NBA season because of a knee injury sustained in the Clippers final preseason game that season and did not make his official NBA debut until 2010. He was Rookie of the Year his first full season. In January 2018, he was traded to Detroit.

This season with the Pistons, Griffin missed a bunch of games to start the season rehabbing from an injury suffered the season before. In 18 games so far, he is averaging 15.5 points and nearly five rebounds per game.

The former Oklahoma star has averaged 21.7 points and nine rebounds per game for his career and is a six-time NBA All-Star. In 53 NBA playoff game, he has averaged 21.6 points.

Buddy Hield played at Oklahoma from 2012-16. Like Griffin before him, Hield won both of the major collegiate National Player of the Year awards. He was selected No. 6 overall in the 2016 NBA Draft by the New Orleans Pelicans. 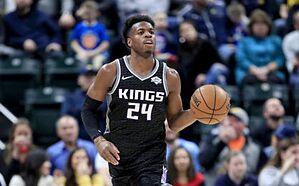 INDIANAPOLIS, INDIANA – DECEMBER 20: Buddy Hield #24 of the Sacramento Kings dribbles the ball against the Indiana Pacers at Bankers Life Fieldhouse on December 20, 2019 in Indianapolis, Indiana.  (Photo by Andy Lyons/Getty Images)

Hield played less than a full season with the Pelicans before being traded to the Sacramento Kings late in the 2017 season. He has been with Sacramento ever since. He was named to the NBA All-Rookie team in 2017.

Now in his third full season as a member of the Kings, the former OU star is averaging a team-high 20.5 points and close to four three-pointers per game.

In three-plus NBA seasons, Hield has averaged 15.6 points per game and has shot 41 percent behind the three-point line.

In late November this season, Hield scored a career-high 41 points in leading his team to a 103-102 road victory over the Boston Celtics.

Trae Young, who played high school basketball at Norman North High School, spent just one season at Oklahoma, in 2017-18, where he led the nation in the extremely rare combination of both scoring (27.4 per game) and assists (8.7 per game). He was a consensus First Team All-American. 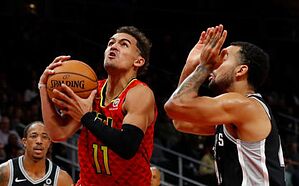 ATLANTA, GEORGIA – NOVEMBER 05: Trae Young #11 of the Atlanta Hawks drives against Trey Lyles #41 of the San Antonio Spurs in the first half at State Farm Arena on November 05, 2019 in Atlanta, Georgia. NOTE TO USER: User expressly acknowledges and agrees that, by downloading and/or using this photograph, user is consenting to the terms and conditions of the Getty Images License Agreement. (Photo by Kevin C. Cox/Getty Images)

Young is currently the most productive former Sooner playing in the NBA. He is in his second full season with Atlanta and ranks fifth in the league in scoring with a 28.8 average in 33 games and is also fifth in assists with 8.3 per game.

He scored 38 points in the Hawks’ season-opening win this season at Detroit and followed that up two nights later with a 39-point performance in the season home-opener against the Orlando Magic. He poured in a career-high 49 points in late November against the Indiana Pacers and scored 47 right before the Christmas holidays against the Brooklyn Nets.

Eighteen times this season, Young has scored 30 or more points in a game.

Terry Stotts played at Oklahoma in the late 1970s under head coach Dave Bliss. He was drafted in the second round of the 1980 NBA Draft by the Houston Rockets, but never played in the NBA.

Stotts began his coaching career at the professional level, serving as an assistant under George Karl in 1990-91 with the Albany Patroons of the Continental Basketball Association. Before joining Portland in the NBA, he was head coach for two seasons each in Milwaukee and Atlanta and was an assistant for one season at Golden State and for four years with the Dallas Mavericks.

Multiple Sixers react to playing with Shake Milton as the starter