It’s 3 a.m. and I’m elbow-to-elbow with two million people. The air is still thick from fireworks, and the flailing of a man sitting atop a traffic light equally hypes up and concerns the crowd at Yonge-Dundas Square in Toronto. Screams, cries and laughter get drowned out by the loudest rendition of “O Canada” I’ve ever been a part of. Because right now, for the first time in history, a Canadian team has just won the National Basketball Association (NBA) Championship.

I have to preface this story by saying that I’ve never really been into basketball. To be honest, the only Curry I ever cared about came in the form of a take-out container from my favourite Indian restaurant in Dunbar. 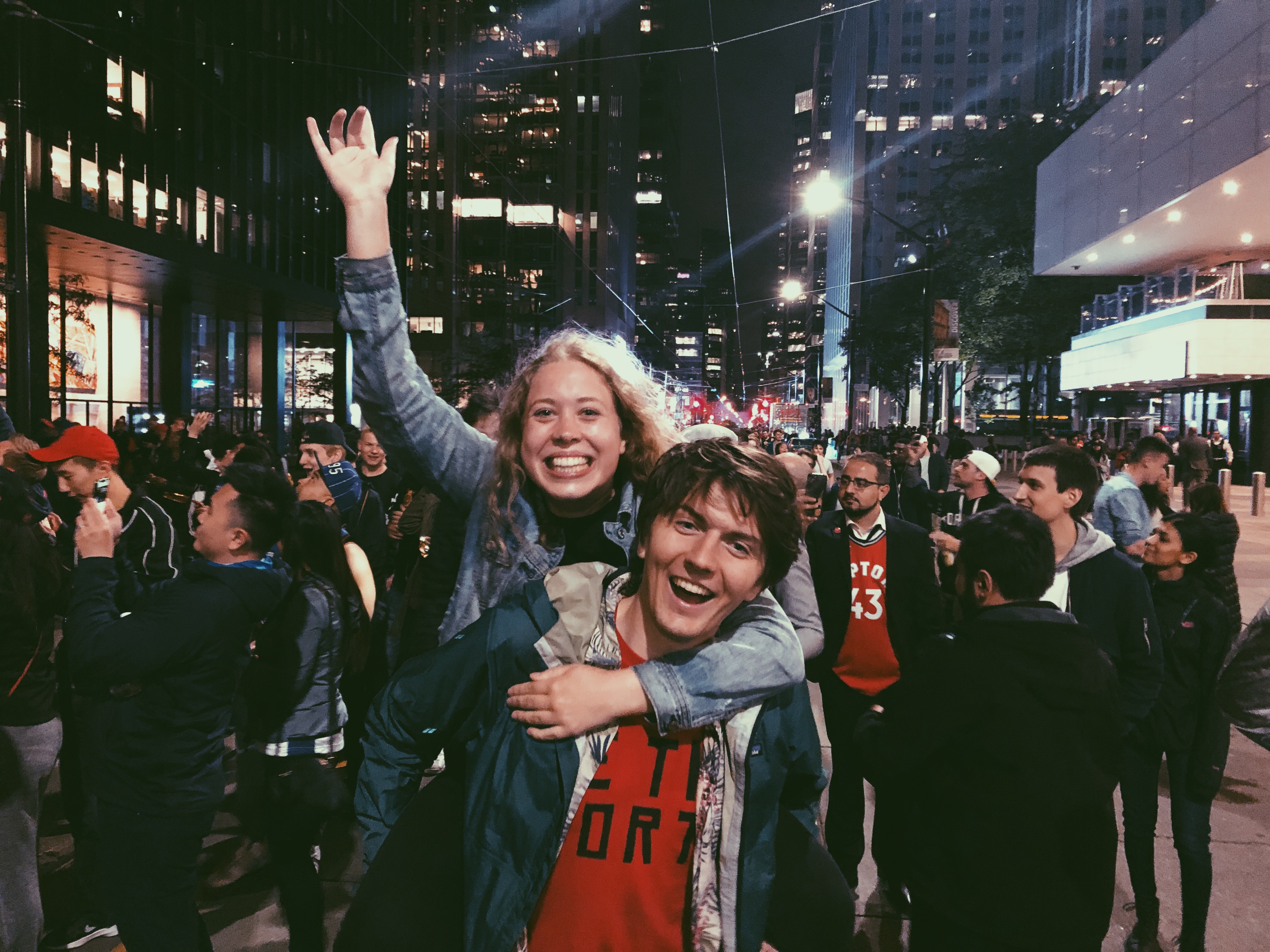 But a new summer internship just happened to land me in the 6ix right during the 2019 Toronto Raptors’ NBA playoff season. With the opportunity to make my brother (a devoted and diehard Raptors fan) moderately jealous, I decided to brave the torrential downpour and head to Jurassic Park — the infamous viewing area outside of Scotiabank Arena — to watch a semifinals game.

The crowd was so big the group of us had to watch it in not the first, or even the second, but the third designated alternate viewing area. I stood among a sea of red; fans yelling, crying and chanting “SPICYYYYY” whenever number 43 (Pascal Siakam) made a basket. My hype for the Raptors was instantly piqued.

Excitement for the team only grew when a couple days later, after six hours of waiting in more rain, we made it into Jurassic Park proper for Game 6 of the Eastern Conference Finals. Although, I will admit that a large portion of the excitement was the chance of a potential Drake sighting, as he celebrated with fans in the previous game.

But when the Raptors won the Eastern Conference Finals, we, alongside the entire city of Toronto, exploded. Somewhere between high-fiving a two-year-old and watching a man do pull-ups on a street sign, I knew that I was going to see this series to the end. And almost two weeks later, just as the Looney Tunes once beat the seemingly unstoppable Monstars, the Toronto Raptors triumphed over the Golden State Warriors and won it all.

But why did I care? More importantly, why did all of us UBC students join together in cheering on a team on the other side of the country that many of us didn’t even know exist in the months before?

Simply, this historic win changed the way so many of us interacted with each other — in particular, it gave us something to collectively root for.

With classes, clubs and commitments galore, we students often get so busy that we have no time to watch athletic events. In turn, UBC has been criticized as a university that lacks school spirit. Although we have some of the country’s best university sports teams training and competing right on campus, many students just don’t seem to care.

As a result, students often remain divided — separated by our faculties and majors. Our opportunities to come together and root for a common goal seem to be few and far between — which is why this historic win was not only important for our country, but also our UBC community too.

Sure, the City of Vancouver didn’t organize a viewing party, but how many of you went to a bar, hung out with friends or casually watched the game while eating your sushi roll? And in those cases, what did the situation look like?

For me, it was the person in an expensive car that honked to the beat of the Raptors cheer while high-fiving young fans running past them on the street.

It was the couple dancing to an impromptu brass band while kids break danced to Drake less than 10 feet away from me.

It was devoted fans and bandwagoners alike who gathered together to celebrate not just a basketball game, but a moment in time where no matter who you were or where you came from, the impossible could be achieved. I imagine that your experience may have been similar.

Moments like these seem to be fleeting and it’s impossible to say when another major championship will be won by a Toronto team, or any Canadian team again.

But in the meantime, support your student athletes or just go to a sporting event on campus that you thought you didn’t really care about before.

Let’s continue to come together, UBC. It feels pretty good to be We The North.

Raptors use biggest rally in franchise history to beat Mavs

Gudjohnsen & Hasselbaink: The story of ‘Fire and Ice’ | Football...

Why pros might break a strict Augusta National rule at fall...