“Johnny is a great shooter. He was the best 3-point shooter on the adidas Gauntlet circuit last summer,” said Peek.

The 6-7 Juzang averaged 23 points and 6.9 rebounds per game for Harvard-Westlake (Calif.) in what was his junior season before he decided to reclassify to the 2019 class and picked UK over Virginia and Oregon. His commitment gave coach John Calipari a needed deep shooting threat.

“I asked him once how many 3’s he puts up a day and he told me he tries to shoot anywhere from 300 to 500 3’s when he’s in the gym,” Peek said. “Between him and (signee) Tyrese Maxey, I think this will be a very good outside shooting team next year at Kentucky.”

Since Juzang reclassified to this year’s recruiting class, he’s not had a chance to interact that with much with UK signees Maxey, Kahlil Whitney, Dontaie Allen or Keion Brooks. However, Peek doesn’t think that will be a big issue because of his personality.

“Johnny is a pretty laid back kid who gets along with everyone, so I don’t see him having any issues fitting in with the other guys in the class,” Peek said. “In terms of how he’ll fit on the court, I think his minutes will be limited and he might be used as a reserve player who can knock down the 3 and give the starters a little breather.”

Not only does Kentucky have Maxey, a top 10 point guard, joining the team but guards Ashton Hagans and Immanuel Quickley both return. Hagans started most of last season and Quickley got extensive playing time. That year of experience and maturity would figure to give both an edge over Juzang.

“Johnny will definitely need to get stronger but he has a good frame and has always been so disciplined playing under the tough coaches within the southern California Compton Magic AAU program, I think he’ll adjust well,” Peek said. “His jump shot is the key and if he’s knocking it down early and consistently, he will see some good minutes.

“Looking at Kentucky’s guard-heavy class I thought he was a lock for Virginia but there’s something about coach Cal and these kids wanting to play and learn from him that seals the deal in the last minute. Maybe he’ll redshirt or be more of an emergency player similar to how Duke used Joey Baker this past year.

“Or is this the year Kentucky and coach Cal play some small ball? The way the class is shaping up, next year will be interesting with all the guards coming in.”

Like most incoming players, Peek says Juzang will need work on his defense and speed.

“It’s one thing to defend high school guards in California but it’s going to be on a whole new level once he faces the experienced guards in the SEC,” Peek said. “Luckily he’ll be going head to head with some of the quickest guards in the country in practice and that will really help him.”

When former Kentucky baseball coach Keith Madison first saw the bobblehead of him that was unveiled at Kentucky Proud Park last week he laughed … and laughed some more.

“And then, I felt honored that UK Athletics would choose to remember me,” Madison said Thursday.

Why not? The personable Madison was UK’s head baseball coach for 25 years starting in 1979 and won 723 games, fifth best all-time in the Southeastern Conference. Still, Madison always downplayed what he did even though he’s had 85 players either drafted or sign pro contracts and has had 14 players reach the major league level. Forty-four of his players earned all-SEC honors and nine more were named all-Americans.

“It’s a humbling feeling. (Kentucky athletics director) Mitch (Barnhart) and (UK coach) Nick (Mingione) have gone out of their way to make me fell like a part of the ‘family.’ It’s pretty special,” Madison said.

Madison is a regular at Kentucky baseball now and often provides analysis on the UK radio broadcasts.

“I absolutely love coming to the ballpark. I thought I would be sad that I couldn’t watch games at The Cliff (UK’s previous stadium), but Kentucky Proud Park is such a fabulous place. I haven’t missed The Cliff as much as I thought I would,” Madison said. “It’s fun to talk baseball with Darrin Headrick and Dick Gabriel and Doug Flynn (on the radio). Doug and I were teammates in the minors so that makes it even more fun. I also enjoy talking to the fans and basically everyone who loves baseball like I do.”

For the third straight year Kentucky softball not only hosted a NCAA regional, but also went 3-0 to easily advance to the Super Regional at Washington this weekend.

Senior third baseman Abbey Cheek, the SEC Player of the Year, said getting to host postseason games in John Cropp Stadium was a huge plus for the Cats.

“Definitely, the Big Blue Nation, for sure, the fans that we bring in and it is just insane to have such a great atmosphere here,” Cheek said. “It really shows that if we get a big hit how loud they are or if we get a groundout on defense before we even throw the ball they are screaming because they know it is going to be an out.

“It is really cool to have that fan base and just to play at home for this senior class one more time was really cool and we went out with a bang.”

Kentucky will take a 36-22 record into Super Regional play after playing one of the nation’s most competitive overall schedules this year. The Cats will be trying to reach the World Series for the second time — and first since 2014.

“Every year after we have lost in supers we have talked about how we have to get over that hump (to get to the World Series) and we have really focused all season on getting over that hump and getting to the World Series. I really feel like that as long as this team is staying in the moment like we keep saying, it is going to be really cool for this team,” Cheek said.

It could better than cool having seniors Jenny Schaper, Katie Reed and Cheek at the top of UK’s batting order. This year third baseman Cheek is hitting a team-best .441 with 20 home runs and 53 runs batted-in. Schaper, a catcher and leadoff hitter, is at .315 with 12 homers and is third on the team with 49 RBI’s. Reed, the shortstop, is hitting .371 with six homers, team-best 16 doubles and 43 runs knocked in.

“There is so much (confidence) right now. We have been through the regionals and supers for three years now and I think just being mature and having us at the top really helps the middle of the lineup and the bottom of the lineup know that if we are doing good they are going to be confident in the box if we are confident,” Cheek said. “It is just really important to have three seniors at the top of that lineup.”

Morris grew up a UK fan in Bell County, was a standout player and committed early to UK. King has always been a Kentucky fan and committed before her junior season.

So what advice would Morris have for King as she prepares to start her UK career after playing in the Kentucky-Indiana All-Star Games.

“Same as I told Blair (Green of Harlan County). The first year will be the hardest year because of so many adjustments. You have to focus on basketball and school. Make sure you take care of business on the court and the classroom,” Morris said.

King, like Morris, has not played on the big stage like she’ll face at UK even though Lincoln did play a rugged schedule this past season like Morris faced at Bell before heading to UK.

“My accent made me, not embarrassed, but I do not really know the word,” Morris said. “I was used to just a few interviews, not many. At Kentucky I just kind of embraced the publicity you get from TV stations, ESPN, SEC Network. It’s an opportunity to share your story and let people know who you are.”

Morris said the transition is not as hard as some might expect because the players mainly stay together.

“Now people kind of notice us but my freshman year we stuck together and kept our heads on and stayed in the gym and worked on school work,” Morris said. “We weren’t really out acting a fool or nothing like that. She will be the same. You just get focused on what you have to do and the big stage won’t get to you.”

Despite missing the fall season recovering from a hand injury, Kentucky freshman golfer Cullan Brown of Eddyville had a solid spring season for the Wildcats. He had a 72.4 stroke average (for 18 holes) during eight spring matches and finished in the top 20 of four events, including two top 10 finishes.

He had an eye-opening 64 in the opening round of the Mason Rudolph Classic and had a career-best fifth-place finish in that event. He also was a top-10 finisher in the SEC Championship with rounds of 69-69-72 and won his match against Tennessee in the match play portion of the tourney.

In the spring season, he had 10 rounds of par or better and combine his experience with good health and he could be set for an even bigger sophomore season.

Quote of the Week: “They’re all great players because they went to Kentucky. I’ve got that much belief in my school and what my past coach did for us and what he did for them. I feel like they’re prepared for the NBA and when they come here, they’re going to feed into this culture,” Miami Heat rookie Bam Adebayo on UK players PJ Washington, Keldon Johnson and Tyler Herro as potential Miami draft picks in the June draft.

Quote of the Week 2: “I remember my first day at Kentucky, she looks at me and said, ‘Autumn you’re a bowl in a china shop. You know what that means?’ I was like no! And she was like, ‘Well how would a bowl in the china shop look?’ I’m like, ‘Normal.’ Turns out she was saying you’re a bull in a china shop. So that’s like a running joke of the pitching staff,” Kentucky junior pitcher Autumn Humes on a little miscommunication with coach Rachel Lawson.

Quote of the Week 3: “Service is something that has been instilled in me since I was a kid. I have my parents to thank for raising me to spread love, joy and smiles. I can’t wait to continue trying to make that possible each and every day,” Kentucky junior first baseman T.J. Collett after being named to the SEC Community Service Team for the second straight year. 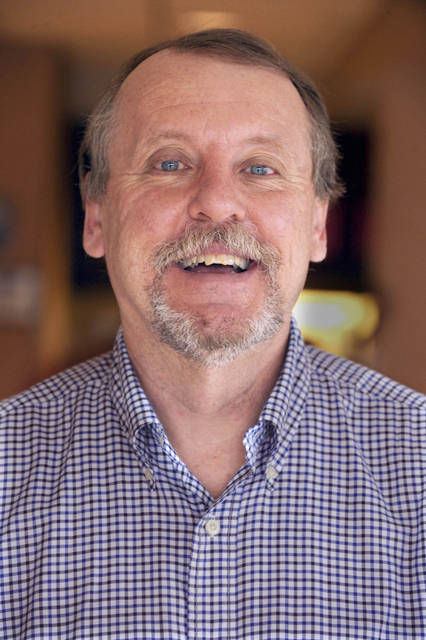 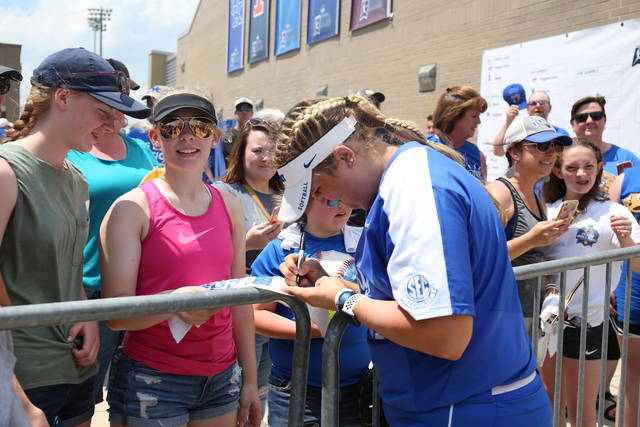 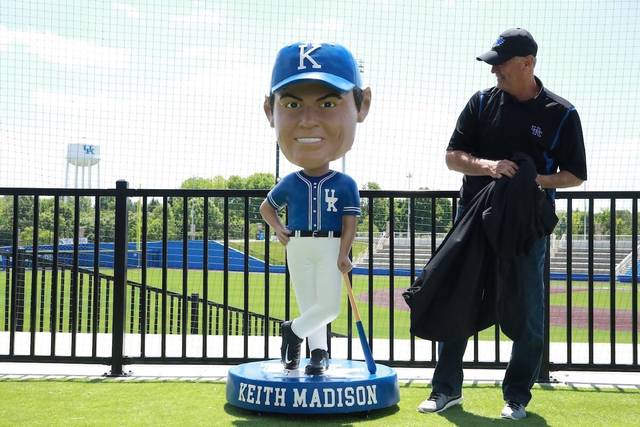 Keith Madison was honored to have his own bobblehead placed at Kentucky Proud Park. (UK Athletics Photo)

NBA playoff matchups all set except for top-seeded Lakers’ opponent

💰 Predict six EPL scores correctly with Futaa6 and $10k could...

Quiz! Can you name the clubs with the 30 most expensive...